Hello! Just wanted to do a quick post on what I've been up to lately since blog posts have been so scarce! I have mainly been spending time with a few hobbies outside of work, old ones and new ones. I bought a Canon T2i in April and have taken up photography and messing around with the video functions as well. I built a dolly and it seems to work out decently overall. 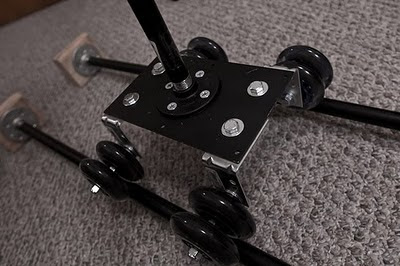 Here's a video test I put together with it:

I went down to Hollywood Boulevard for about two hours shooting some footage and put together this video. I also took the time to write the music for this one.

I'm really enjoying exploring and experimenting with the camera right now and hope to create some narrative short films in the future. It's nice to have a little "instant" gratification when doing the video tests. Being able to go out and shoot the footage, edit it, throw some music on top of it and be done with it in a day or two doesn't happen much in the world of animation, so even if it's just a small montage like the above clips, it's a fun process!

I'm also still playing guitar when I have the time. Took some time a few weeks ago to learn the solo from "Bark At The Moon".

Bark At The Moon-Guitar Solo from Adam Strick on Vimeo.

My friend and fellow DreamWorks Animation animator, Alexis Wanneroy, is jumping in to the world of dslr's as well with his Canon 5D MkII. He shot and edited this to help advertise the Mixed Martial Arts Madness class. The client wanted the music to be a bit heavier so he asked me to add some guitars on top of it to see if that would work so I was happy to give it a try and help out. They seem to be happy with the results and kept it in the video.


I'm currently taking an advanced creature design sculpting class at work one night a week for the next 5 weeks with Jordu Schell! This guy is an amazing sculptor that's been working in Hollywood since 1987. If you don't know his stuff you should definitely go check out his HUGE gallery of work at http://schellstudio.com/. He's a pretty entertaining guy too so I expect the classes to be fun. I took a figure sculpting class a few months back so this will be a fun and difficult step into creating my own character. We'll be sculpting with super sculpey, which I haven't used much so hopefully I don't hit to many road blocks while working with it.

I've been staying busy with the podcasts for Speaking of Animation as well. We have some great ones coming down the pipe in the future that I'm sure you all will enjoy!

I try to spend time animating some personal stuff in there when I have the time and am feeling up to it but it's definitely tough to do. I have a personal test that I've been working on for the longest time that I hope to eventually post. My focus is going to start pulling in on this in the near future so there should be more posts about it!


Anyways, if you've decided to read this far, I will now apologize for this long update post! I guess when one holds off on posting this long this is what tends to happen.
Posted by Adam Strick at 10:32:00 PM

Adam Strick
I am a character animator with experience in feature films, commercials, and games and have worked at Walt Disney Animation Studios, DreamWorks Animation, Blue Sky Studios, Psyop, Agora VFX, and Little Zoo Studios. If you'd like to contact me for work please email me at: strick.animation@gmail.com